Jiangxiaobai YOLO Music Festival” first show of China Hip-Hop Community Grand Ceremony season II made a hit in Beijing on September 1st, 2017. GAI and BRIDGE, key members of GO$H, Purple Soul, After Journey, Huang Xu along with other hottest rappers gathered on the site and made a blast, officially launching a Hip-Hop carnival party as part of show tour of ten cities across China, unprecedented in size. Jiangxiaobai, a Chongqing-based Gaoliang liquor brand, continued the efforts to boost minor youth culture and realize the influence of Hip-Hop as well as to provide Hip-Hop culture with a mainstream dispersion channel and to integrate it into the life of more young people. 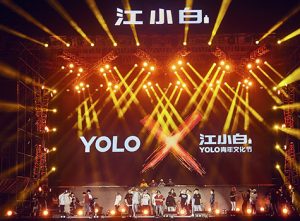 Why does “Jiangxiaobai YOLO Music Festival” perfectly fit with The Rap of China？Is it a enforced pursuit of hot spot？ Many people might be the fans of Rock ‘n’ Roll and folk music before The Rap of China appeared on TV this year. However, a large number of people turned to fans of Hip-Hop. Jiangxiaobai began to explore the minor Hip-Hop market since 2016 and held the “Jiangxiaobai YOLO Music Festival” season I by gathering underground original rappers across China.

YOLO refers to You Only Live Once. For any Hip-Hop musician and fans of Hip-Hop, Hip-Hop traditionally has nothing to do with fame and fortune. Although business changed everything, music is always where they come from. One lives once only. Music lets them find a unique personalized way of expression.

Since 1980s when Hip-Hop landed in China, It has been nearly 40 years during which the Hip-Hop youth eventually appeared on the stage from underground sites step by step, fueled by their insistence. Bearing the nature of grassroots, it remains the reflection of real life. The rappers express themselves with music while revealing themselves with wine. The fans bind music with wine, acting as the “New generation” of the special subculture. By launching “YOLO light Gaoliang Liquor, Jiangxiaobai will take a lead in the young consumers’ inclination toward the spirits with light taste as well as pass on the youth culture and spirituality exclusive for the times. Jiangxiaobai never sets itself in the pursuit of hot spot. It is a hot spot itself.

Hip-Hop is a particularly important phenomenon in culture, spirit and society in the new period. Jiangxiaobai has become the booster for Hip-Hop original music culture in China. Jiangxiaobai has been dedicated to creating youth personalized culture of the new era since it launched the supporting plan for the youth art in 2013. In addition, Jiangxiaobai actively took part in a variety of cultural activities to promote music, contemporary culture and art. However, “Jiangxiaobai YOLO Music Site” will be a grand party where China’s original rappers meet and exchange ideas annually.